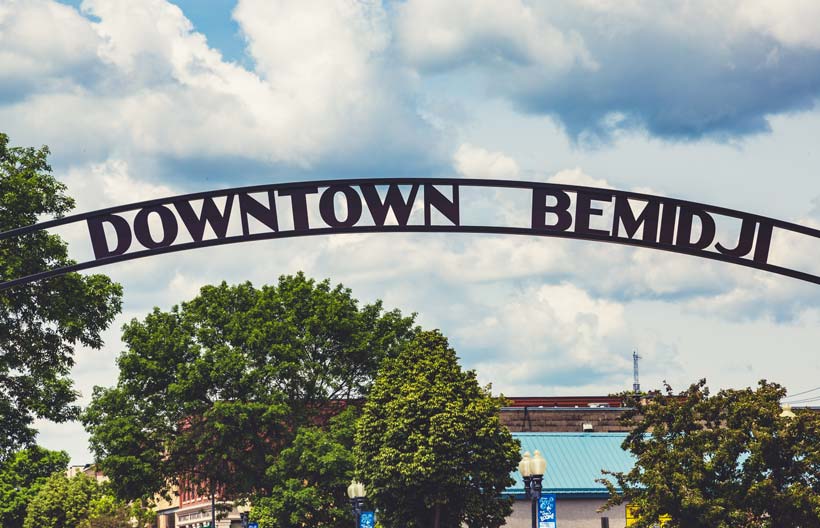 Bemidji, “The First City on the Mississippi”, is a medium-sized city located in northern Minnesota. It lies on Lake Bemidji about 150 miles northwest of Duluth. Bemidji has a population of around 15 thousand people. It’s surrounded by three Indian reservations and many lakes. Bemidji is a shortened version of the Ojibwe name ‘Bay-may-ji-ga-maug’ which means ‘lake with crossing waters’.

Bemidji focused on lumbering operations from the late 19th century and it became the major logging and sawmilling center over the next several decades.

Bemidji is a city that has a unique history.

Native Americans were the first residents in the Bemidji area. They settled across Northern Minnesota around 10 thousand years ago. The Dakota people were living in the area of present-day Bemidji around 400 years ago.

When the fur trade started to decline in the mid 18th century, people started to look for other ways to make a living, such as selling timber. By the year 1910, Bemidji’s Crookston sawmill became the second largest sawmill in the nation.

Lumber production was the main part of Bemidji’s economy up until a series of sawmills were caught in fires in the 1910s and 1920s.

Chemicals in the Bemidji’s Drinking Water

When they dug Bemidji’s wells in the mid 20th century, the land near the airport was the perfect place with good water. That’s why all five of the city’s wells are located at the airport. But that was also the place where firefighters trained for years with firefighting foams.

Minnesota Department of Health researchers began testing samples of drinking water to see if there were any chemicals present in the drinking water across the state.

Bemidji was one of the cities where water testing was conducted. At first, the amount of PFAS chemicals in the water was not in alarming quantities. But after the water was tested with more accurate methods a few years later, they saw that the number of chemicals was much higher and far more dangerous.

PFAS are man-made chemicals that have been highly used in many different industries because of their ability to repel oil and water. They are also known as “forever chemicals” because they build up in our bodies and they never break down. Longer exposure to PFAS has been linked with liver damage, thyroid disease, high cholesterol, hormone suppression, cancer and more.

Bemidji had to shut down 3 of their 5 wells. Bemidji started to look for ways to fix this problem. They decided to build a water treatment plant to get the harmful chemicals out of the water, which will cost 16.5 million dollars.

Bemidji’s predicament is one more example of the environmental damage wrought by the oldest PFAS, the “forever chemicals” manufactured by 3M Co. and other companies between the 1950s and 2002.

In 2010, the State of Minnesota filed a lawsuit against 3M seeking payment for natural resource damages caused by 3M’s disposal of PFAS.

PFAS compounds were a key ingredient in firefighting foams widely used around Minnesota and across the country for years. 3M says it no longer makes or sells those foams, but they have continued to manufacture newer types of PFAS for other uses.

Minnesota reached an $850 million settlement with 3M last year over environmental damage from PFAS, but the sites polluted by fire suppressants were not a focus so unfortunately, Bemidji wasn’t able to fix this problem from this budget.

The chemicals also ended up in two private wells and led to a fish consumption advisory for nearby Wild Rice Lake.

Health officials have said that private wells nearby weren’t contaminated.

Bemidji’s Fire Department no longer trains at the airport and they now use a newer formulation that’s considered safer.

Bemidji started to dig a new well. It will be located far from the airport to make sure the water is not contaminated by PFAS. Since this project will cost around 2 million dollars, there is a high chance that residents will have to pay higher water rates in the future.

Most of the surveys revealed that nitrate levels were below the federal legal limit. But the members of EWG claim that their findings are still concerning. Just because the nitrate levels are within legal limits, it doesn’t mean that they are safe.

Even the minimal amount of nitrates can be dangerous for our health and it’s linked with cancer, various illnesses and birth defects. Nitrate most commonly enters water sources from soil and crop fields because it’s found in fertilizers and manure.

Other Contaminants in Bemidji Water

Minnesota Department of Health – Environmental Health Division conducted water tests to identify any contaminants located in Bemidji water. The water was tested between 2012 and 2017. They found 8 contaminants that exceeded the health standards that were set by EWG (Environmental Working Group) and 13 contaminants in total.

It’s also important to note that just because some contaminants are within legal limits, that doesn’t mean that they are safe for your health. Also, legal limits for contaminants in tap water have not been updated for around 20 years.

Contaminants that exceeded the health standards were: