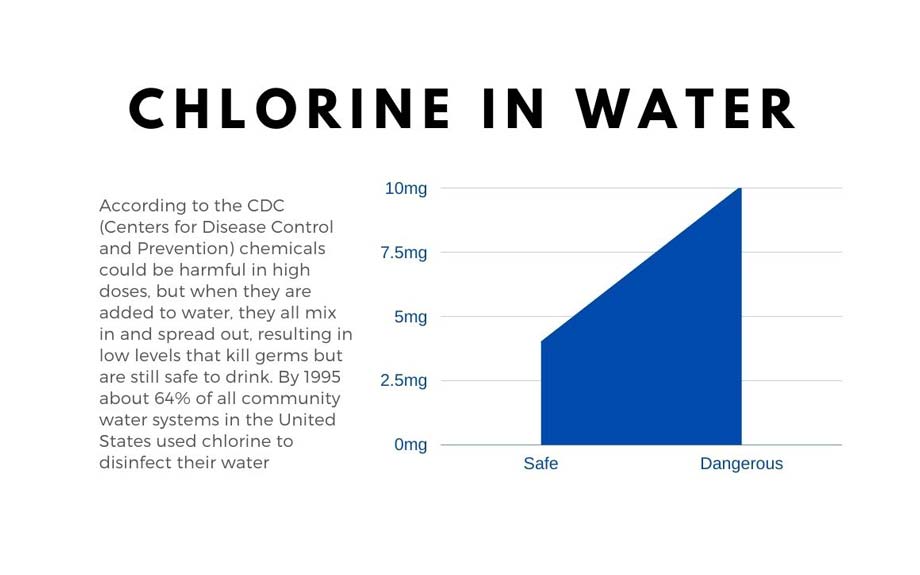 Chlorine in Drinking Water: Is it Safe? What Can We Do About It?

If you live in a city or town with recycled drinking water, then chances are your water contains Chlorine. Chlorine, or Chloramine, is added by the water treatment professionals to clean the water of microbes that could cause water-borne illnesses in those that drink it. I’ve been in some places where I could smell the chlorine in the glass as I drank the water. I read that some people are more sensitive to it than others. I’m not sure if I’m one of those people but I found it extremely unpleasant to smell it while I was taking a drink.

“Chlorination is the process of adding chlorine to drinking water to disinfect it and kill germs. Different processes can be used to achieve safe levels of chlorine in drinking water. Chlorine is available as compressed elemental gas, sodium hypochlorite solution (NaOCl) or solid calcium hypochlorite (Ca(OCl)2 1. While the chemicals could be harmful in high doses when they are added to water, they all mix in and spread out, resulting in low levels that kill germs but are still safe to drink 2.” – Center for Disease Control

According to the Center for Disease Control, Chorine is safe in low enough concentrations like those found in chlorinated drinking water coming out of treatment plants. Also, the Chlorine molecules found in water are different than the more dangerous Chlorine gas that can cause eye irritation and skin burns. In this article I’m going to get to the bottom of it and teach you about these important Chlorine-related issues when it comes to drinking water:

How Does Chlorine Get In Our Drinking Water?

Chlorine is added to drinking water by water treatment plants in order to kill off microbial organisms that could lead to people getting sick. If you’ve ever swum in a public pool or gone to a gym that has a pool inside, you’ll have noticed the smell of chlorine in the air. While those concentrations are certainly higher than those found in drinking water, it’s the same idea. It’s simply added to help keep the water drinkable.

The Center for Disease Control should be an authoritative source of information on this topic as the entire organization is centered around keeping people safe from disease. According to them, drinking water that contains small amounts of chlorine is perfectly safe. Carefully chosen water safety standards are applied and regulated to water treatment centers that keep an eye on the levels of chlorine in drinking water constantly. They always give the caveat that if you are concerned, you should talk to a healthcare professional. They make a note about dialysis patients stating they must use water that has been decontaminated of all chemicals including chlorine for use in dialysis machines.

Once you wander past the first two pages of Google you start to find things that are a bit more interesting such as this billion-dollar lawsuit where women are suing the city officials of Chesapeake, VA for misleading the public about the effects of chlorine in the water. There’s a rare occurrence when chlorine that is added to water by treatment facilities reacts to the methane that is naturally found in algae, twigs, leaves, and other particles found in the water to create chemicals that are toxic to people. In this case, these chemicals, trihalomethanes, potentially lead to over 170 miscarriages in the late ’90s. It remains to be determined whether or not the water was the real cause of the miscarriages or if the city officials were responsible, but it shines some light on the fact that chlorine in drinking water might not be 100% safe 100% of the time.

How Can Chlorine Be Removed From Drinking Water?

There are four common ways Chlorine can be removed from the water. They are off-gassing, boiling, charcoal filtration, and chemical treatment.

Off-gassing is a very simple concept. You simply let the water sit out in the open air until all the chlorine has evaporated. The process will finish after roughly 24 hours and the levels of chlorine in the water will be mostly diminished. The only downside of this method is that it takes a long time. It should also be noted that off-gassing only works for Chlorine and not Chloramine, another related chemical that is used by water treatment facilities to kill microbes in the water.

Boiling Chlorine Out of Water

A faster way to rid drinking water of chlorine is boiling. It’s a similar concept to off-gassing only the process is greatly sped up with the addition of energy in the form of heat. This method also does not work for Chloramine.

A simple way to remove Chlorine and Chloramine from treated water is the further treatment of water using Potassium Metabisulfite. PM is used by beer and winemakers to completely decontaminate water before the brewing process. One Campden tablet is enough to remove chlorine and chloramine from 20 gallons of water. It’s relatively inexpensive too. If you only need to decontaminate water to drink, this can be a great thing to try.

Another chemical that can be used for this purpose is good ole Vitamin C (ascorbic acid). This is a common strategy among gardeners because even the small amounts of chlorine found in treated drinking water can negatively affect the microbes found in potting soil. Those microbes are important for the health of plants so some gardeners turn to vitamin C filters to clean the water for their plants.

So, Is Chlorine in Drinking Water Safe to Drink?

I would say yes, but only if it’s in small enough concentrations to be harmless. If you aren’t sure, you should have your water tested so you know exactly what’s in it. If you are concerned about the smell or taste of Chlorine, you have many options to choose from for removing it from your water. Just make sure you are using the appropriate method for the job. As always, if you have the means, then have a water treatment company come to test your water and offer possible solutions to your problem. The professionals know things we can’t learn from reading an article online so when it comes to our health, let’s not mess around.