Duluth is the fourth-largest city in Minnesota and is at the center of the second-largest metropolitan area in the state. – Wikipedia

There are over 85,000 people that rely on water that is pumped out of Lake Superior, the third-largest lake in the entire world! This makes Duluth a pretty special place. Pumping water out of a gigantic lake and making it safe to drink for thousands of people can be a difficult task and is not without its special challenges. In this article, I am going to talk about some of the specific issues that Duluth water treatment specialists have to deal with so that you can gain a better understanding of why it’s so amazing that your water in Duluth is clean enough to drink straight out of the tap!

Since 1898, all of the drinking water for the city of Duluth has come from Lake Superior. A whopping 5,000,000,000 gallons of water is pumped out of the lake and treated in treatment plants every single year! The process has been refined over the years.

The water was first treated in 1912 and on by adding chlorine. Chlorine kills microorganisms that live in the water and could make people sick or cause other issues like plumbing clogs. 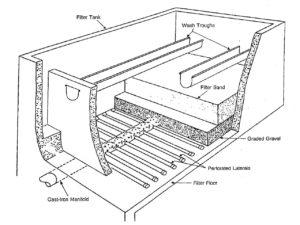 Eventually, rapid sand filtration was added to the system to filter out other contaminants that can’t necessarily be treated with Chlorine.

Eventually, the Lakewood Water Treatment Plant was built to provide up to 13 million gallons of clean water to the city of Duluth in a single day. The city spared no expense investing over $6 million using federal and state funding. Adjusted for inflation that is almost $19 million!

In 1992 the Lakewood Water Treatment Plant was expanded to be able to handle up to 32 million gallons of water per day so that it could provide clean water to neighborhoods as far away from the town center as Lester Park, Park Point, and Fond Du Lac. The coverage area was also expanded to include Hermantown, Rice Lake, and Proctor. You can reach the utility office by calling 218-739-4130 or find their website here.

I spoke to Mark Proulx, the Utility supervisor at The Lakewood Water Treatment Plant. He says that the biggest challenge water treatment operators experience is due to seasonal changes. The temperature of the water coming into the plant ranges from 34 degrees in the winter all the way up to 70 degrees in the summer. As the season changes, so does the water temperature and this has a profound effect on the way it must be treated. For example, more chemicals are needed as the water warms up so operators are watching the weather and are ready to take action and make adjustments when storms come through the area. According to Mark, the operators are the ones on the ground making things happen and keeping the clean water flowing in Duluth.

If your water comes from a well or you aren’t satisfied with the state of the water that is reaching your home, you have options to treat your own water. There are local water treatment companies in Duluth that can address your specific problems. They will come out and test your water for free and guide you in finding the right system for your needs.

According to Geologists working out of the University of Minnesota, this salty water is the result of a couple of natural processes. First, a couple of billion years ago during the Precambrian Age, there was a buildup of what we now call Candian Shield brine. Millions of years later these salty deposits were pushed up from the depths in which they rested by gigantic glaciers that moved through the area tearing up the land and reshaping the terrain. The end result is hidden pockets of this salty water that sometimes get accessed by unsuspecting water drinkers. Saltwater can be treated by special systems that are installed in between the water well and your home. In Duluth, this is a common occurrence so any water treatment company will know exactly what to do.

Sometimes I get to dive into the past to discover information that is relevant to the present. In an article published in 1973 by the New York Times, scientists and journalists were blowing the whistle on a mining company that had been dumping tailings into Lake Superior for almost two decades.

Thomas Grier, a microbiologist at Duluth’s Dr. Paul Duray Pathology Fellowship, says Asbestos is a concern of many when it comes to drinking water in Duluth because most of the city’s water comes from Lake Superior. Almost 50 years ago the Reserve Mining Company was dumping 67,000 tons of tailings into the lake EVERY SINGLE DAY FOR 16 YEARS! It’s hard to believe, isn’t it?

Tailings are the leftover rocks and rubble that result from mining operations in their pursuit of taconite. The tailings included a large amount of asbestos, the sort of asbestos that can enter the body through the stomach lining, and work its way to other areas where it causes long-term damage. Talk about a good argument for government regulation! It was said that it will take thousands of years for the asbestos to eventually work its way out of the main body of water so it’s a problem that the city and surrounding areas will be dealing with for the foreseeable future.

I was relieved when Mark Proulx from the Lakewood Water Treatment Plant in Duluth said that state testing of the water for asbestos was ended by the state in the late ’70s because “All of the tests were coming back negative for asbestos.” Despite this, the plant still operates as if there is asbestos in the water. The ultra-filtration they carry out leaves the particle levels in the water around .016 which is very good by official standards. When it comes to public safety, it’s best to play it safe.

It’s amazing how interesting local information can be. We are blessed in the United States to have so much land and areas to cover. I will never run out of things to write about.

I hope this article is helpful for you. If you have any questions or comments, please use the comment section below this article and I will respond right away. If you have suggestions for additional articles or think we got something wrong and want us to issue a correction, please contact info@groundwaterworld.org.

Thank you for reading and have a great day.