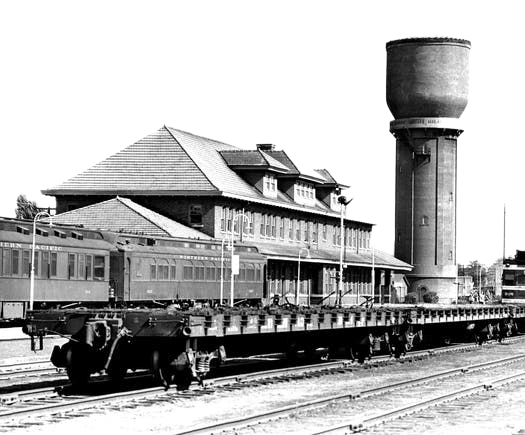 Brainerd is the largest city in Crow Wing County, Minnesota. Prior to the building of the large concrete water tower at the corner of Washington and 6th, the people in this area had a hard time getting access to consistently clean water. It wasn’t for lack of trying. There had been a long history of scammers and con artists that made big promises to the people of Brainerd but never delivered on those promises. Behold, in 1920 the problem was finally solved when the famous water tower was built.

Over the centuries and decades, there have been many changes in the way that locals in Crow Wing County gained access to pure drinking water. In this article, I will touch on some of the major events that have occurred in this area throughout modern history and help you gain a better understanding of the drinking water situation in the Brainerd area. This area has a very rich history so I implore those that are interested in learning about the past to check out this amazing article by the Crow Wing Historical Society.

The Brainerd Water Tower is a staple for those that live in the area. It looks like a castle and has two American flags shooting out of the top. The tower itself is a fantastic example of American innovation. In fact, the Brainerd Water Tower was the first all-concrete elevated water container to be used by a city in the United States. (Source: Wikipedia)

The use of the tower ceased in 1960 when another water system was built but it has continued to stand as a proud icon of the town of Brainerd. Over the years there has been talk of taking the tower down but this initiative has found a fair amount of resistance among the local populace. The problem is that the tower requires maintenance in order to keep from falling apart. If the budget to keep the tower repaired cannot be found, then demolition is the only reasonable option. So far, the people of Brainerd have managed to keep it alive with donations.

If you haven’t before, go check out the tower for yourself and marvel at the magnificence of American ingenuity!

According to ewg.org, the nitrate level in Brainerd water is 2.1 times higher than the EWG Health Guidelines Standards state is acceptable. At .289ppm, the nitrate level is still well below the federally mandated standard of 10ppm, but it hasn’t put the issue to rest for everyone.

In the January 2020 Brainerd Dispatch article, writer Matthew Guerry writes that “Hundreds of thousands of Minnesotans drink from tap water sources that contain potentially unsafe amounts of nitrate.” A water quality non-profit tested over 1000 groundwater systems and over 13,000 private wells and found that the nitrate levels in the water were well below the federally mandated standard, but the levels were still high enough to cause concern about the long-term health effects which include cancer. So, where does nitrate come from, and how does it get in the drinking water?

Some think that the main cause for nitrate in the drinking water is fertilizer used by local farmers. When it rains, the fertilizer is washed away and makes its way into the ground where it eventually gets into the water supply. There is serious debate about the level of concern that is warranted but if you are concerned, there are actions you can take to remedy this situation for yourself and your family. The first thing we recommend is getting your water tested by a professional water treatment company in your area. They will be able to determine exactly what contaminants exist in your water and give you your options for how to deal with them. The most common fixes for nitrate in water are Reverse Osmosis Systems and Ion Exchange Systems like water softeners.

Our recommendation for a water treatment company in Brainerd is Range Water Conditioning. They have proven to be a highly competent and respected company that has been helping Minnesota citizens fix their water for over 50 years. They can test your water and show you what your options are for making it 100% pure and safe. Look at their reviews before you call so you can get an idea about what it’s like to work with them.

Every so often some sort of contamination happens with the Brainerd water supply and the people in charge of keeping Brainerd supplied with clean drinking water are required to add chlorine to the water to kill any bacteria, viruses, or other microorganisms that could potentially get people sick. When the problem is resolved, this board must vote when it’s time to shut off the flow of chlorine into the water.

The last such vote was 6 years ago in October of 2014. The board, at this time, decided to stop adding chlorine. Brainerd is one of the few cities that doesn’t continually add chlorine to the water, a common practice in cities throughout the country. Most cities add a small amount to the water to keep it free of germs that can spread disease and illness, but it changes the flavor of the water and might have other long-term effects that aren’t commonly talked about.

The water in Brainerd is pumped out of an aquifer deep below the city. The main argument for stopping the chlorination is that the possible dripping of chlorine down into the aquifer can permanently taint the water. The taste and smell of the aquifer water was the main topic of concern as the fresh taste and pure state of the water is a highlight of Brainerd groundwater.

According to the Minnesota Department of Health, chlorination of city water is required under the following conditions:

Citizens in Brainerd are historically skeptical about adding chemicals to their water supply, in fact, Brainerd was the last city in Minnesota to add fluoride to their drinking water. When it was time for the board to vote on the chlorine issue, the board members received numerous emails from concerned locals, most of which requested that less, not more, chemicals be added to the drinking water. For now, at least, the people of Brainerd will enjoy city water free of chlorine, until of course, the next contamination happens and the system must be flushed again.

Is There Something We Missed?

Thank you for reading this article. I hope it was informative and gave you some insights about the water supply in Brainerd, MN. If you have any suggestions or feedback about information we should add or anything we got wrong, please leave a comment below or email us at info@groundwaterworld.org.