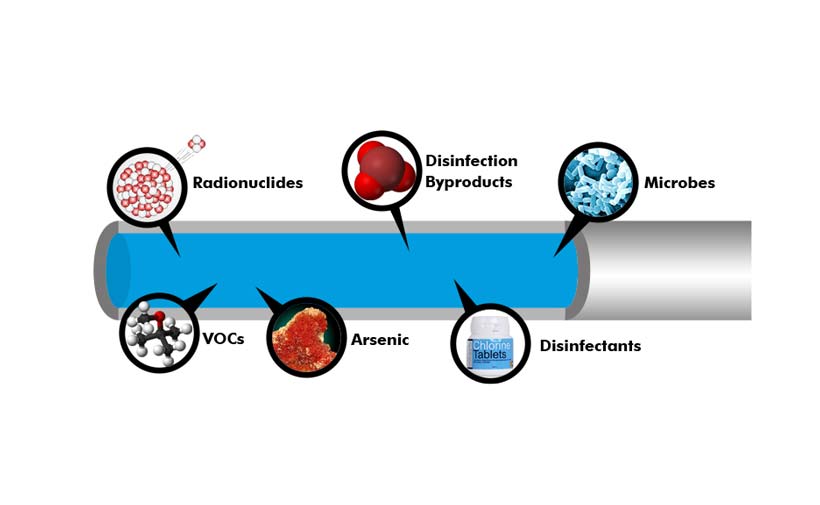 No one can live without water, water is the essence of life. Water is synonymous with health and people need enough water to stay healthy. But, when water is contaminated by germs, chemicals or sometimes even animal feces, that will not only make your stomach turn, but also cause various health problems.

Clean water is a necessity for all of us, whether we use it for cooking, cleaning, drinking or almost anything else. Luckily, the water in the USA is one of the cleanest in the world. However, it doesn’t always stay clean, but we will get more into that later.

The unfiltered water doesn’t only contain hard water minerals or molecules that can worsen the taste of your water, it can contain many different dangerous bacteria, parasites, contaminants and viruses, such as:

This list can go on forever, the point is that the unfiltered water can contain a lot of dangerous contaminants that can damage your well being.

These contaminants aren’t as rare as you would perhaps think, the U.S. Geological Survey found dangerously high levels of arsenic present in drinking water wells in more than 25 states. [1]

Your drinking water supply might not be as clean as you believe it to be, we recommend that you test your drinking water from time to time, especially if you notice sudden changes in color or the odor of the water.

Some water treatment companies even offer free water testing, a quick Google search will show you a lot of different companies in your area.

How can we prevent these problems from happening?

Whether you are using a public water supply or if you have a private well, you can find a water conditioning system for your needs.

In this article, we will look at reverse osmosis water conditioning systems to find out what benefits they have for your health and general well being.

What is reverse osmosis?

Reverse osmosis is a water purification system that makes your water soft and removes 99.9% of contaminants in your water.

The way it works is by filtering all the water that goes into your home with a semipermeable membrane. The membrane has holes in it that are so small that only pure water can pass through.

This is what makes reverse osmosis such an effective water conditioning system.

The Centers for Disease Control and Prevention has stated that a reverse osmosis filter has a pore of approximately 0.0001 micron in size, which makes it really effective for removing protozoa, bacteria, viruses and common chemical contaminants like chloride, chromium, lead and more. [3]

By being an effective water purification system, reverse osmosis can provide various benefits for our health and general well being.

We’ve briefly touched upon this topic in the previous sections, but it’s important to talk more about it.

Before the water arrives at your home from your drinking water source (public water source or private well), it comes into contact with various minerals and contaminants.

Water that contains a lot of minerals is known as hard water and it’s not necessarily dangerous, unless these minerals are in extreme quantities, they don’t present a serious risk for your health.

However, hard water can be really annoying by leaving stains on your appliances and glassware, making your clothes scratchy, reducing the lifespan of your water-based appliances and causing all kinds of problems.

Reverse osmosis blocks these minerals and it only lets the soft water pass through which by itself removes all those bad stains that were caused by calcium deposits.

Reverse osmosis water also has some benefits on your skin. Research has shown that hard water is the cause of many skin diseases because it makes skin dry. Also, soft water is easier to wash with, so you won’t need to use as much soap or detergent as you would with hard water, which is great for people whose skin gets easily irritated.

Other than hard water minerals, reverse osmosis also blocks various contaminants. Unfiltered water can contain all kinds of contaminants, from bacteria and viruses to dangerous chemicals.

Your local government has already taken certain measures when it comes to making sure that the water that comes into your home is clean and pure, but most of the time, they don’t really do a great job.

Drinking water supplies in the United States are one of the safest in the whole world but water sources constantly keep getting contaminated.

The non profit organization called “Environmental Working Group” reported that 43 states have sites where water is contaminated with toxic compounds. They also found out that 21 million Americans were getting water from sources that violated health standards in 2015 only! [4]

By installing a reverse osmosis system at your home, you can sleep well knowing that the water you drink doesn’t have any viruses, bacteria, parasites or chemicals that will damage your health or the health of your loved ones.

Bad water taste isn’t linked with dangerous substances like arsenic or nitrates and infectious agents like viruses or bacteria.

Municipal water comes from different sources like rivers and lakes, not just groundwater sources. It has to take a long journey through different pipes before it arrives at your home.

The reason why your water might taste earthy, metallic or like rotten eggs can originate from bacteria, disinfectants, decaying vegetation or animal feces. Yikes.

This kind of odor is caused by high levels of sulfur bacteria and hydrogen sulfide gas. If you only have this problem when you are using hot water, then the problem is most likely linked with your water heater and not the contaminants in the water itself.

Reverse osmosis fixes this issue and other similar issues like water tasting like earth or metal by blocking molecules that cause this bad smell.

Reverse osmosis membrane has small holes that will not allow these contaminants to pass through, which will make your water taste much better than the regular tap water, especially if you had problems with bad water taste and odor in the past.

You will save money on buying bottled water

A lot of people avoid water problems at home by buying bottled water, but bottled water costs much more in the long run and it doesn’t solve the fundamental problem with contaminated water.

The water you buy might be great to drink, but the water you use daily at home for cooking, cleaning and washing is still going to be hard water with contaminants.

Reverse osmosis doesn’t only solve health related problems with drinking tap water, it also makes your water better for your daily use.

Bottled water is 1000 times more expensive than the regular tap water and it’s also terrible for the environment. The manufacturing process requires millions of barrels of oil and the mineral water has to be transported over long distances which produces huge amounts of carbon emissions.

It’s also important to add that the production costs and technological advancements have significantly helped reduce the cost of buying a reverse osmosis system.

Reverse osmosis reduces the amount of sodium in water

Water softener is another water conditioning system with primary purpose to make hard water soft. The way this system softens the water is by replacing minerals (mostly calcium and magnesium) with sodium or in some cases potassium.

The water softener collects the calcium, magnesium and other minerals and it flushes them down the drain from time to time.

We all need sodium in our everyday lives as it’s necessary for our bodies to function properly. We also eat sodium chloride every day, we just call it salt.

The amount of sodium in softened water isn’t necessarily in dangerous amounts unless the water in your home has a lot of minerals.

High amounts of sodium in water can make your water taste a bit salty.

Amir Pasic is a web design and CRO expert currently based in beautiful Bosnia. When Amir is not providing marketing services for his clients, he is reading and writing about the groundwater industry throughout the world.